We’re in the process of recovering from our first Danish Juleaften, aka Christmas Eve, so I thought I should use this lazy time to pull some photos together.

Our Juleaften actually had a multi-day preparation phase, interspersed with a trip to Tivoli to see Nøddeknækkeren (the Nutcracker). Phase one was going to Torvehallerne to collect our Christmas porchetta and julemedister (Christmas sausage). I liked seeing all the packages waiting for their forever homes this Christmas…

We also got the jump on Christmas baking with some vaniljekranse (vanilla wreaths), they turned out pretty well after some adjustments to the size of the piping star – you need to strength of a viking to get them piped out, but they look nice in the end.

To protect the vaniljekranse I bought Ant a sacrificial snack of sylte. Apparently it’s other name is ‘head cheese’ because it’s made from a pig’s head… um, yeah. Gross. Tastes good apparently – served up with rugbrød, strong mustard and pickles.

Fuelled by vaniljekranse and sylte we took off to Tivoli. The Nutcracker was so lovely and festive – an excellent experiential gift arranged by my sisters in cahoots with Ant. The set decorations are done by Queen Margrethe, so I was hoping for them to be a kind of Emperor’s New Clothes style disaster, but they were perfectly fine. Tivoli is so pretty over Christmas – the perfect way to get into the jule-time spirit. 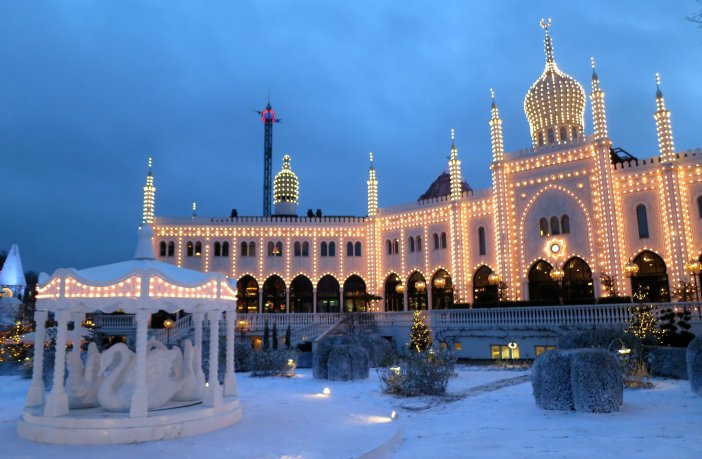 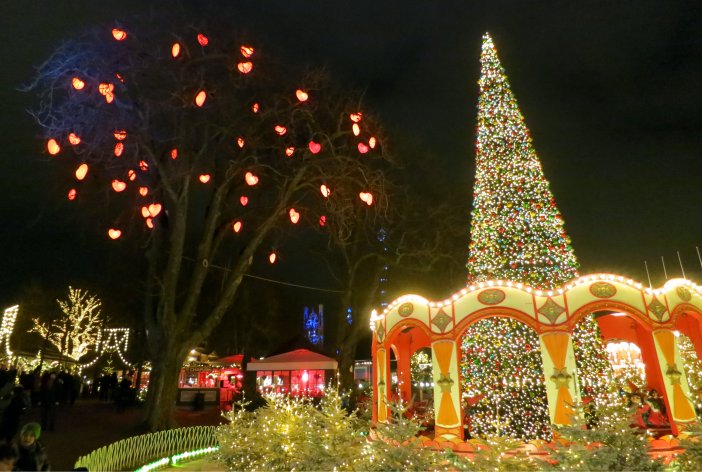 We were suitably freezing after wandering around looking at the lights, so we warmed up with some Christmas sausage. It might have been a combination of being cold and hungry, but in my mind this was one of the world’s great sausages.

With that it was off to bed to wake up bright and early for juleaften, and most importantly the morning risengrød that Ant had been psyching up to make for weeks. It was a bit of an endeavour – it took way over an hour to cook so it was no so much a breakfast treat as a lunch treat, but worth the wait. It’s basically a buttery, cinnamony rice porridge. You make a big vat and then use the leftovers to make risalamande for dessert that evening.

And with that, onwards to our juleaften banquet, in which five Aussies try and attempt a Danish Christmas for the first time.

We tried to keep it very traditional with the usual Danish Christmas suspects like duck, pork and sugar-browned potatoes. Yes, potatoes covered in caramel are a legitimate, nay compulsory, thing here at Christmas. They sound like they could be an abomination, and some amongst us were suspicious, but they are actually amazing. It’s too bad you can’t justify eating them all year round.

We all got stopped in our tracks at the final course – the risalamande. This is cold rice porridge mixed with vanilla sugar, whipped cream and chopped almonds, and topped with cherry sauce. So tasty, but brutally filling. The twist in the tale is that you put one whole almond in someone’s bowl, and everyone has to keep eating until the almond is found. In some families this apparently leads to cruel and deceptive tricks, like secreting the almond in your cheek so that everyone keeps eating in vain. If you are feeling really sadistic, you can also put the almond in the big pot to start with, so it’s conceivable that you just have to keep getting seconds until the almond finally appears. We were all so stuffed by this point in proceedings that Anna’s discovery of the almond was a blessed relief.

Traditionally the prize awarded to the almond finder is a marcipan gris (marzipan pig), but I bucked tradition and saved the pig for Ant’s Christmas present. We are yet to feel up to taking a bite of this little guy though – still too full of risalamande…