It’s beginning to look a lot like Christmas around Copenhagen, particularly since the Christmas lights and Christmas markets suddenly appeared all over the place. I’d say I’ll leave them for later because they really deserve a whole post, but the reality is I just haven’t taken any photos yet. I have, however, been keeping track of some of the other Danish Jul goings on over the last few weeks.

First and foremost, we’ve got our first ever ‘real’ Juletræ… actually this is our first Christmas tree of any kind, so I’m pretty excited about it. It seems like every open space right now has a Juletræ shop in it.

Full disclosure – I piked on the ‘town square tree market’ and just got ours from Føtex. I know, there is no romance in that consumer choice, but it had to be small enough to get strapped to the front of my bike. Our little tree is hyggeligt enough though, providing you like mushrooms, and most importantly it has the compulsory Nisse hiding away in the branches. 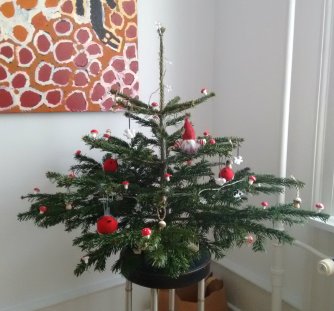 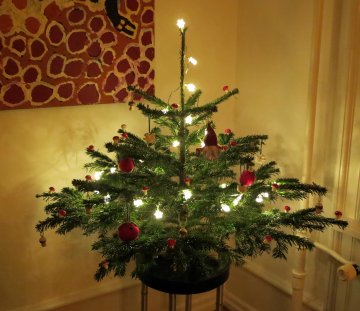 Our building’s shared courtyard also had a giant tree appear in it, so now we really have surplus festive tree action all around us, especially at night when it’s all lit up. 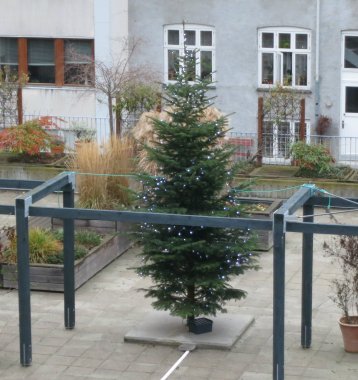 I think we will be obligated to get a full sized tree at some point before we leave, if only so we can go full Danish and enact the ‘Nu er det jul igen’ ritual. This basically involves putting actual, real live lit candles on your dry tinderbox of a tree, and then running around the tree in increasingly frantic circles while singing the special ‘Nu er det jul igen’ song. It seems like a TERRIBLE idea as far as I can see, but my Danish teacher assures me it’s quite safe because obviously you have a bucket of water sitting nearby. Hmmm, yes… ok. Sounds extremely safe. And also like Dad’s worst OH&S nightmare, so of course we’re going to attempt this next year around the Stickmas tree – you have a full year to prep the PPE, Wayno.

Anyway, the song is quite fun. The first verse says it’s Christmas again and soon it will be Easter, while the second says that that’s not true because in between Christmas and Easter comes Lent, which feels like it takes forever.

We did the singing and running around in a circle in our Danish class Julemorgenmad (Christmas breakfast) party, thankfully sans lit candle hazards. We all brought along appropriate breakfast/Christmas foods and had a fine old time speaking bad Danish and playing Pakkeleg. This is a game like Secret Santa but with dice, and no guarantee that everyone ends up with a gift – classic Denmark. Nothing like a festive reminder that life isn’t fair. I can’t take any credit for the following pictures – thanks goes to my lovely classmates Napat and Tatiana.

Flettede julehjerter (pleated Christmas hearts) are very trad decorations in the Scandi countries, and particularly beloved in Denmark because the oldest version was made by none other than H.C. Andersen. Clearly a man of many talents, and another extremely useless fact to add to my ever-expanding collection.

The Julemorgenmad was a bit of a trick, because we held it two days before our Module 3 Danish exam – it felt cruel to have to come home from a fun party and immediately have to hit the books and study, but at least it’s all done now.

The upside to impending exams is they provide a good excuse for procrastination cookery, and we’ve been making our way through the wide array of seasonal treats that come out at this time of year. First up: Jødekager (Jewish cookies). They were so tasty – full of spices and topped with sugar and cinnamon. 10/10 would bake again. 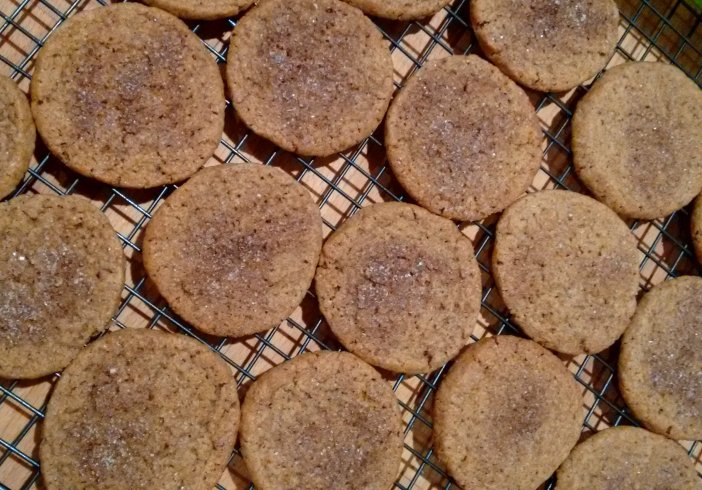 We followed it up with an epic Brunkager (gingerbread) batch, which was a bit of a multi-day affair given it has a two day proving phase. We’ve been getting these recipes from Magnus Nilsson’s giant Nordic Cooking tome, which is imposing yet also subtlety hilarious the whole way through. The recipe ‘makes’ the guide says ‘enough for a traditional family gingerbread free-for-all’ with the caveat that ‘there is no point in making any less’ so we did as we were told and now have about 2kgs of gingerbread. No regrets. The almond and pistachios are what distinguishes Danish Brunkager from the gingerbreads of the other Nordic lands. The Brunkager are not quite so immediately sweet and delicious as the Jødekager, but the spices and ginger taste seem to be deepening with age and they are becoming crazy moreish…

We have also been periodically hitting the æbleskiver, which wiki adorably translates as ‘pancake puffs’. Some have apples in them, but I think the dodgy frozen ones we’ve been getting haven’t had an apple anywhere near them. We were keen to try and make them from scratch as well, but you need a special cast iron pan and a lot of dexterity, so frozen it is… maybe we’ll be prepped for it by next year. You serve them with icing sugar and berry compote and it’s all pretty luxurious and more than compensates for the damp and misty 2 degree days we’ve had all weekend.

Our last new ‘tradition’ is to embrace the Danes’ obsession with advent. There is definitely way more focus on counting down the advent here than back home, to the extent that you even get branded advent calendars as a form of seasonal advertising (as you can see, we got this one a bit late so all the rules about which door to open when are out the window).

While the proliferation of chocolate advent calendars doesn’t seem too out of the ordinary, on TV there is also a special advent show that plays for half an hour every night from 1st December until its finale on Christmas Eve. We haven’t been game to make the 12 hour commitment to that one, but there is yet another annual Christmas show called Rytteriets Jul that is played each Sunday of advent that we’ve been watching. From what I can work out it’s basically the Danish equivalent of the League of Gentlemen making a four part Christmas special each year. Our Danish is just at the point where we can watch it in Danish with Danish subtitles and understand maybe 80% of it, and it’s pretty interesting trying to process jokes in a foreign language. Some of them I think must get genuinely lost in translation, and others you probably just need to be Danish to understand them. I found a clip from last year’s show – my best translation of the title is ‘We drive in with Christmas penis’, just so you know what you’re getting into…

Our other chosen advent medium this year is the kalenderlys – a candle with the days from December 1 – December 24 marked on it, the idea being you burn it down a little each night in a simple cozy ritual… needless to say it’s really taken over our lives. I was a little late in buying it, so the first two weeks or so involved us frantically trying to play catch-ups through forced hygge-time, sitting in the dark willing our poor little candle to burn down. We finally caught up around the 14th, then got overconfident and accidentally burned through two days at once. Oh dear. We’re finding that a kalenderlys is really quite demanding. I’m really glad I went for the skinny quick-burning type as well – we’d be in all sorts of trouble if I foolishly had gone with the fat slow burning type.

Of course the wax always runs down exactly where the numbers are. Damn candle-tyrant. Next year I might go with the weekly adventskrans version, where you start with 4 new candles and you light one in the first week, two in the second and so on… much less precision required.

Finally, in what has turned out to be quite the bumper Christmas edition of our blog, I will leave you with Denmark’s finest Christmas song, or should I stay Christmas rap. I’ve been told this gets played more than any other song in Denmark around Christmas time. Just sit back and let the dulcet tones of the Danish language wash over you as MC Einar complains about rampant consumerism during the festive season…