When planning this trip I did not expect that my absolute favourite thing about Møn would be the churches. In reality we went for the cliffs, hiking and camping, but stayed for the Medieval lunacy of the local churches.

We were almost thwarted by a rookie error: choosing to visit on a Sunday during Confirmation season. We comically ended up visiting three of the four churches twice and driving all over the island in an effort to see them all. That’s right, we smashed through four churches in a day, such was our new-found love for them.

Møn’s gothic churches were built around the 13th century, and are known for their frescoes. Some of these are as old as 1350, but most date from the mid-15th century. The guide book described them as ‘highly original’, which really doesn’t go any way towards preparing you for the demented sights you are about to see. If you are ever on Møn then definitely pay them a visit, no matter how secular you are, or how jaded you are about looking at yet another old church in Europe.

The biggest town on the island is Stege, and of the four churches we visited Stege Kirke was the most stylish and least deranged. The Reformation really scored an epic own goal by whitewashing over these murals, which instead of destroying them actually preserved them. Nice one. Their error is very much our gain. This church speaks to the power of ‘less is more’, and also made me really hope harlequin outfits come back into fashion.

The other three churches we visited were spread further out in small towns around the countryside. The Keldby and Elmelunde Kirker are only about ten minutes apart in the north of Møn, while the Fanefjord Kirke is way down in the south west. If you only visit one then I’d say go to Fanefjord, but really, go to them all – become a connoisseur. I doubt you’ll regret it.

They are all connected in that their frescoes were primarily painted by ‘the Elmelunde Master’. Almost nothing is known about this artist, except the obvious – that he is a hilarious super genius. 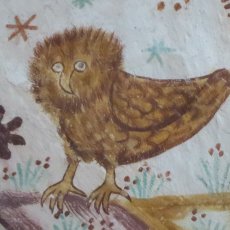 I must have more in common with an illiterate, church-going Danish peasant that I would have previously assumed, because these paintings really spoke to me. Must be our common humanity. Actually viewing these paintings simultaneously made me love humanity’s imagination and folly and sense of humour, and also hate how violent and awful and deluded people have always been.

The drive between the churches took us through some ridiculously picturesque Danish countryside, although I was too busy trying to navigate the country backroads to be on photo duty. We did, however, take some time to admire this handsome pheasant:

We also visited some Stone Age passage graves, Klekkende Høj and Kong Asgers Høj. There are over 100 of these kind of tombs on Møn – the one in the pictures is Klekkende Høj, which is known for being the only double passage grave on the island. It was just lying halfway across a farmer’s field, and you can crawl right in there – BYO torch. It’s actually nice and dry and not too claustrophobic once you’re in there, until you look up and see the size of the stones that are somehow being supported above your head. At that point you realise you are putting a lot of faith in 6000 year old construction methods…

I like to think that we have all learned something from this post, principally that the medieval times were batshit crazy, and that the Elmelunde Master’s works are timeless.