Our last mission in Ribe was to see the ‘black sun’ formed when a murmuration of starlings circles in the sky at sunset before landing for the night in beds of reeds. Yes, a murmuration is apparently the collective noun for starlings. I can see myself getting that as a trivia question one day and not being able to remember it, so hopefully by writing it down here I can help avoid that cruel fate.

It was amazing in a way that can’t really be captured with my photographic skills, but I made some attempts – apologies in advance. Turns out I am not Bence Máté after all.

The first phase involved small groups of starlings coming and congregating on the powerlines. Every now and then the whole lot would erupt off the wire, and then settle back down moments later. 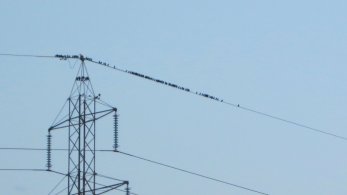 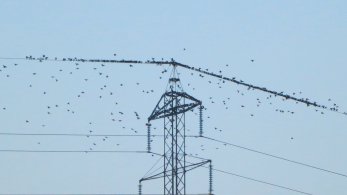 Eventually the groups grew, and joined forces into one big dynamic swarm that stayed airborne. The guide spoke of it as the birds dancing, and it’s a good description. 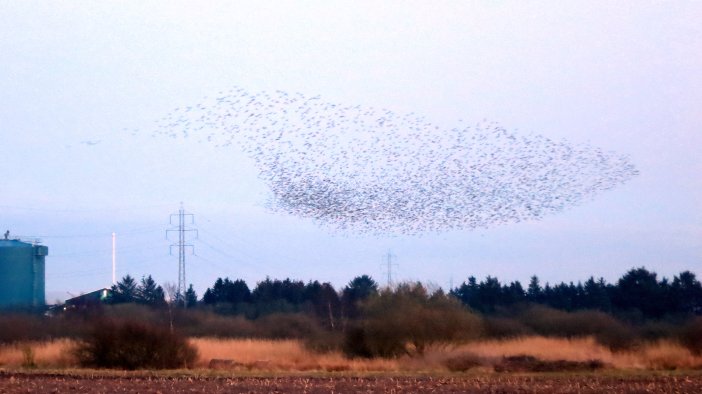 As the sun went down the birds finally all shot into the reeds, all disappearing in a few seconds. What would otherwise have been a pretty spectacular sunset was very much overshadowed by the starlings’ acrobatics.

That was our cue to head home to spend some quality time with Ribe’s finest – more self-foraged, self-shucked oysters and locally brewed beer. Life is hard when you are living the new-Nordic dream. As a side note, the man who first isolated and cultivated the yeast used to brew lager came from Ribe, so it was only appropriate that we raised a glass to him.

Just to lower the tone a little we paired the oysters with pizza – a classic and classy combination, I know. The Danes have something very similar to tall poppy syndrome called Jante’s Law (Janteloven). We’ve heard that the combination of Jante’s Law and the focus on work-life balance means that sometimes the Danes are OK with things just being around 80 percent right. In many cases I think the ‘she’ll be right’ approach is perfectly reasonable and adequate. However, I am not sure it applies so well to pizza boxes. Turns out it really helps if your pizza box is 100 percent the right size:

So there you have it – Ribe: go for the beer, oysters and starlings, but probably skip the pizza.

One thought on “Den sorte sol”