Our last Hungary post is dedicated to Woody, who only likes talking about food if it’s Flodge wings, Il Chooko or Feijoada – I’ve banished all gratuitous food content into a single, easily skipped post for his benefit. Don’t say I never do anything for you.

Predictably, our first act in Hungary was to eat a Kürtőskalác fresh off the coals. The first sugary dough tube we had was magnificent. Later in the trip, our second one was as big as our forearm and went some way towards proving you can have too much of a good thing. 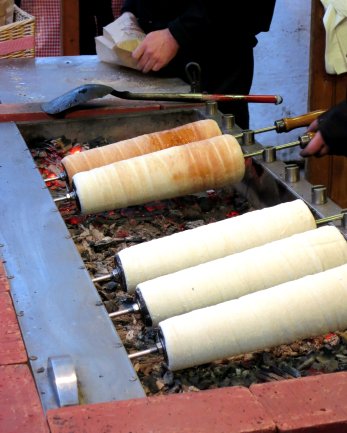 Our second act was to eat some kind of deep fried potato rosti on steroids with delicious kolbász (aka way of saying sausage that makes it sound much more exotic and justifiable). I hope Elvis got to eat one in his later years.

Continuing the run of gross looking, oily, sausage-covered foods, here we have Hungary’s famous kebab-equivalent, the lángos – aka deep fried bread with all kinds of toppings. This one had some kind of potent garlic sauce, the ever-present kolbász, and some cold yet delicious cheese. They really missed a trick by not having melted cheese, but otherwise this makes a fine addition to the pantheon of food to eat at 3am while drunk. Full disclosure – we ate this at 5pm while sober, so probably didn’t appreciate it as much as we would have after about 20 more palinka shots…

All these were purchased at various Easter Markets, including an excellent one in City Park – check out this spectacularly terrible location for a market:

A trip to Hungary is not complete without eating goulash and chicken paprikash, which we dutifully did. I refrained from taking photos of various piles of brown gloop, but I will post one notable meal from the City Park markets, known hereafter as ‘sheep stew’. The stall had one vat of produce and the transaction went like this: Me ‘what is it?’, them ‘sheep stew’, me ‘…okay, one sheep stew’. For something called sheep stew, it was actually great, bones and all.

We were washing all this down with Ant’s new favourite drink: mulled wine with a shot of rum/palinka in it. Drunk at an Easter market? Every excuse. This drink makes it easy to love Hungary:

Somehow, our most regular meal ended up being Böreks, mainly because the shop was nearby, open on holidays and we were always running too late for a proper breakfast. The man selling them described the flavours as ‘apple, cherry, meat, cheese, big meat, big cheese, potato…’. Obviously we were sold at ‘big meat’.

We also braved the Central Market Hall, where Ant had to fight his way through crowds of Hungarian grandmas to check out the salami options. Our purchases were uniformly excellent, except for one processed meat product that tested even those of us raised on a steady diet of devon… pretty sure it had tongue in it, pretty sure it made me feel instantly ill, pretty sure I’m never eating anything that looks like it again. But hey, the diós kifli – walnut crescent biscuit pastry things – made up for it.

This is a nice segue into delicious cakes. We ate so many. We’ve been living on gruel and celery since we got back to offset our indulgences (psych – just kidding, Ant just ate about 50 oysters in four days, we are not suffering any hardship or deprivation).

The krémes narrowly bested the Dobos and Esterházy tortas, but faced surprising competition from a weird poppyseed and blueberry cake. Hungary really loves its poppyseeds, understandably so based on this cake. The Dobos torta was good, but needed a ridiculous amount of force to crack the caramel. It’s a bad design flaw. Just so you know, Krémes are made with eight egg yolks, according to Ant who has extensively researched them.

Anyway, there ends all the weird and wonderful things Hungary served up for us. As a parting image, and a desperate ploy for my posts to be as popular as Ant’s, I’ll leave you with some sphinx-tits (no-one tell Woody that he has missed out on boobs by not reading my food post, OK?).