A few weeks back we took advantage of Ant’s work obligations in Poland and spent a weekend in Gdansk. The lure of pierogis and krówki was strong.

I’ll admit to knowing very little about Gdansk before arriving, and ended up being totally charmed. Gdansk – or Danzig in German – is a seaport on the Baltic coast. It grew in importance from the mid-1300s under the control of the Teutonic Knights. Interestingly, the knights were originally hired in by Polish nobles to get rid of some Danish princes. Things did not go entirely to plan for the Poles, as the Teutonic Knights decided to keep it for themselves and no-one was really in a position to argue with them for quite a few years.

Gdansk’s history from then on is interesting, and way too complex for me to do it any real justice here. Key points of note are that its wealth and position as a port has meant it has often operated as a free city under it own laws, both in the 1500s and even as recently as the 1920s-30s, as a result of arrangements following WWI. Post WWII, it was under a Communist regime that lasted until 1989.

The city is known for the 17th century style buildings in the old part of town. There is also a gigantic brick church – St Mary’s (Bazylika Mariacka) – that the Teutonic Knights threw up in the late 1300s. The church is really quite ridiculous. Ant’s eloquent but justified response to seeing it for the first time the night we arrived was along the lines of ‘that thing is fucking massive’.

We spent quite a bit of time just wandering around the old town. It’s so lovely, and it’s a little embarrassing how little we knew about this place before visiting. 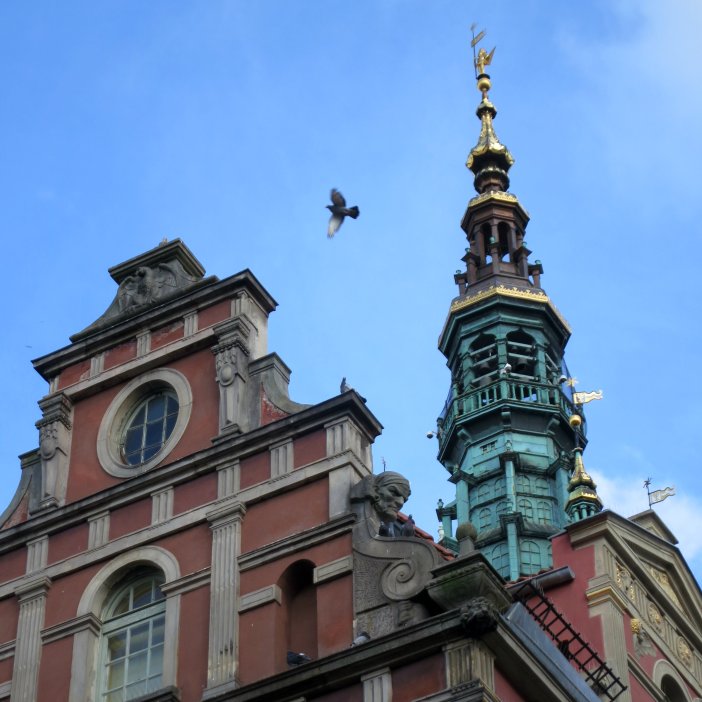 We also climbed 400 stairs to the top of said massive church. Those knights really put all their surplus celibate energies into bricklaying.

St Mary’s is also home to an astronomical clock from the mid-15th century, which shows a whole range of information from somewhat more important things like the time, date and phases of the moon, through to some information about the zodiac signs. I dedicate these pics to Woody – the astronomical clock’s number one fan.

So as not to overlook more recent history, we also visited the European Solidarity Centre. Not going to lie, it was a sombre and exhausting way to end the trip. The centre is built on the site of the Gdansk shipyards, which was where the Solidarity (Solidarność) trade union movement started in the early 1980s. There is a museum outlining the history of the Solidarity movement – from its early beginnings in the shipyard, to how after some early union gains the Communist Government tried to stamp out the movement with martial law, up until 1989 when social change ultimately prevailed. It was an eye-opening insight into Poland’s contemporary history, which I now realise I know relatively little about despite it being so recent.

Of course, while in Poland we also ate ample stodgy polish food. I must preface this section by admitting to being even more off the ball than usual in my ‘food photography’. These photos are all so hilariously amateur – the best one is the one where I ate 90% of the meal before remembering that I need to generate content for this neglected blog. So yeah, my bad. I’ve decided to hide them all at the end of the post so you can bail out as the going gets tough.

For what it’s worth, Ant’s guiding smallgood principle is buy from the place that stocks the fewest different products. It served us well in this instance – delicious smoky kielbasa.

Yep, just pierogi after pierogi the whole weekend. We also managed to stumble across Gdansk’s answer to Gelato Messina. It was a funny place – it was like it was conceived and fitted out by hipsters, but then taken over by force by some tough old Polish guys. It was really hard to work out what the deal was, and very incongruous to see these burly men sticking little teddy bear wafers into ice creams. The crowd also looked decidedly un-hipster, so maybe it was just a regular ice cream shop? Who knows.